My list draws upon various categories and genres: several Native American musicians, many Latin artists, and a pair of Classical pieces. I gravitated toward pieces that have something to do with a response to the COVID-19 Coronavirus.  I suspect that most of you have never heard of these works—but I LOVE them. Give ‘em a try!

1. Pablo Alborán, “Cuando estés aquí,” (Whenever you might be here). Nominated for Best Pop Song at Latin Grammys, 2020. This song directly addresses the COVID-19 crisis in a gorgeous, sad, but uplifting way. Not only does superstar Pablo Alborán sing with grace and passion, but ALL of the profits of this recording go directly to UNICEF in order to combat the virus. Here is my translation of the lyrics:

Now that hugging is postponed and our lives are cut in two,
I see myself surrounded by lies, stray bullets puncturing balls [the spheres of the virus?].
Now that Madrid is a desert, its balconies have nothing else to do but to cry.
My home complains of becoming an office, and my lady-neighbor told me that she’s
going to start dancing again.

Reset the counter to zero, for I will be the first to kiss your scar.
I already know what hell it is to live without you.
And in one more evening, more or less, they’ll see us smile again.
I’ll know that there’s a cure whenever you might be here [again].

Now that forgetting is in fashion, the present demands that we remember.
I try to scrub away the mistakes, such as the list of tranquilizers that I had to purchase.
Now that— behind every grin—we hide the fear of being able to dream,
Exposed strips of naked love peek out through the gate of our freedom.

Reset the counter to zero, for I will be the first to kiss your scar…

2. David Chesky, The Abreu Dances, esp. the “Abreu Dance No. 1.”  Chesky Records, 2020
David just released a ballet in five movements for five solo dancers, The Abreu Dances. The title refers to Juan José Abreu, the mastermind who conceived of the orchestral and music education in Caracas known as El Sistema, the program that brought music to countless kids in Venezuela and produced the amazing Gustavo Dudamel.  The Abreu Dances were filmed in Manhattan, Rio de Janeiro, Sao Paulo, and San Juan, and they are easily found on YouTube.  The ballet is spectacular and rhythmically captivating.  In my estimation, it is a masterwork.

3. Diego Torres (feat. Catalina García), “Amenece,” (The Sun Arises) released Aug 28, 2020.
Diego Torres is always socially aware and crafts songs that bring us together, all of us. This song is his response to the COVID-19 crisis and bases its lyrics on the idea the sun is going to rise again. We’ll get through this.
“We have lived all these years together in order to arrive at this place, where the sun arises, where there is a dawn for poor and rich alike, where the sun rises for those with broken hearts, etc.” [My translation]

5. Nahko and Medicine for the People, “Honor the Earth,” from Take Your Power Back.
A terrific “love song” to our earth and its people, in a captivating Caribbean vibe. Nahko is part Puerto-Rican and part Hawaiian. For DJs, a terrific pairing would be to begin with the preceding song, “Oli K?kulu (Interlude)” that is in Hawaiian and then move directly into “Honor the Earth.”

6. Carlos Vives and Rubén Blades, “No Estás Solo: Canción para los Enfermos” (You Are Not Alone: A Song for the Critically Ill))
This year Carlos Vives won three Latin Grammys and was nominated for yet another three. Six, all together! And Rubén Blades won the Latin Grammy for Best Tropical Song, sharing that honor with Carlos Vives, for their collaboration on “Canción para Rubén” that appeared on Vives’s Cumbiana.
However, I have chosen a song that was not recognized at the Latin Grammys but that I love nevertheless since it directly addresses the COVID-19 Corona Virus. Give it a try. You’ll love it. Here is my translation of the text:

There are “virus-pods” that appear just when you least expect it.
They show up, and even if we don’t want ‘em to, they stick around for days.
They tell us that you’re sick and have come to cheer you up.
[But] sickness is not eternal and even less so if it is shared.

Even though the night seems interminable,
In the end, it is dispelled with the light of day.
Don’t lose faith. Always keep it with you.

7. Chris Brubeck, “Affinity: Concerto for Guitar and Orchestra” with virtuoso guitar soloist Sharon Isbin and The Maryland Symphony Orchestra, dir. by Elizabeth Schulze, on the CD Affinity: World Premiere Recordings [of] Brubeck, Brouwer, Lauro, Tan Dun, Danielpour, on Zoho, 2020. If you love the guitar, you will be ecstatic to hear this composition. And few guitarists are in the same class as Sharon Isbin.

8. Callie Bennett, “Hope,” (featuring Larry Dunn), from the album Awake, Arise, Shine. A single, released on Aug 15, 2020—a direct response to the COVID-19 pandemic. And during this pandemic, no one has suffered more than the Navajo community. Bennett is a beloved star in the Navajo and Native American world. She was nominated for Best Female Artist and for Best Gospel Inspirational Record of the Year at last year’s Native American Music Awards (NAMAs). She also has won a ton of Indigenous Music Awards (Canada) in addition to her NAMA awards. The Corona-Virus caused the NAMAs to be canceled this year, so—sadly—Callie’s songs did not receive the awards they deserved. She’s born in South Korea, was adopted when she was 4 months old, and grew up and lived on the Navajo reservation. She often sings in Diné, the Navajo language. They see her as pure “Navajo.” To all our DJs, a really cool pairing would be to precede “Hope” from 2020 with Bennett’s “The Star-Spangled Banner” (from 2019) that she sings in Diné (Navajo) with an accompanying Navajo drum. It’s beautiful and inspiring.

9. Twin Flames, “Giants,” on their album Omen.
The song’s refrain applies perfectly to the COVID-19 crisis (although I think the song was written before the crisis began). Nevertheless, the loss of a loved one seems universal here. Its refrain goes:
“What’s happening? They called me today. I hope and I pray, that you’ll be OK. … You are bigger than mountains. You are taller than giants. You are braver than lions. You are, you are …”
The group consists of a couple, each of them Native American. The wife, Chelsey June, is Inuk and Mohawk. The husband, Jaaji, is Algonquin Cree. Their hit “I Am Human” from 2019 was awarded Best Music Video Concept Winner at the NAMA awards. That song, “Human,” is included on this album, Omen!! They sing in English, French, Inuktitut.

10. Pitizion y Greeicy [Rendón], “No Pasa Nada” (Nothing to Worry About), cool video done on cell phones during the pandemic. Prem. May 4, 2020. WOW. The entire width of the video is just the width of an iPhone, and the video has lots of shots of fans singing along on their own personal phones. The song’s lyrics are about a dissolving relationship where the vocalist pretends that “nothing’s going on, nothing’s happening, nothing to worry about” (all rough translations of “no pasa nada”). It’s a song with lyrics of denial: it explains, even though my world is collapsing and I crave your kisses, I pretend that there’s nothing to worry about. Pitizion was nominated for Best New Artist at Latin Grammys, 2020. 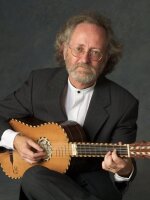 Craig Russell
Professor Craig Russell feels blessed to work with his many brilliant and wonderful students at Cal Poly—where he has taught since 1982. Here on the Central Coast, Craig collaborates regularly with the San Luis Obispo Symphony and SLO Youth Symphony.
See stories by Craig Russell