Investigative journalist, Katy Butler, examines the broken and morally adrift medical system in her book, Knocking on Heaven’s Door: The Path to a Better Way of Death. 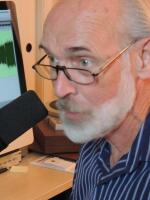 Guy Rathbun
Guy began his career in broadcasting as a field reporter for a commercial radio station in 1975, and was appointed to News Director four years later. During that time he volunteered at KCBX, and in 1982 he was hired as a part-time announcer. The offer of full time Music Director came in 1985. Then in 1986, Guy was promoted to Program Manager, a position he held until October 2011, when he established his own business, Rathbun Productions.
See stories by Guy Rathbun