Journeys of Discovery with Tom Wilmer

Just how far can a jumping frog jump?

Laurie McAndish King reports from the High Sierras at the legendary Calaveras County Jumping Frog Jubilee where she discovers the insider secrets to winning the $5,000 grand prize.

Frog jumpers from around the world travel to Calaveras County, California, to participate in the celebrated Jumping Frog Jubilee—the current incarnation of a contest that’s been held since at least 1865, when Mark Twain first wrote about it.

Contestants hope to beat the standing (jumping?) record of twenty-one feet, five and three-quarters inches for a 3-jump entry—and win the $5,000 cash prize.

What’s it like to participate in such a storied event? Associate Producer, Laurie McAndish King visits with the official Frog Meister, who runs the fair’s Frog Spa and is responsible for the welfare of hundreds of frogs at the event; a volunteer who has traveled all the way from Nebraska—for four years running—to be part of this extravaganza; and an experienced frog jockey (the human half of a contestant team).

Listen in as King learns how to tell a male from a female bullfrog (hint: check their ears), how jockeys coax the best performance from a jumping frog, where fair officials get the 4,000 live crickets they need to feed the frogs, and why the frog-jumping community feels like family.

Award-winning author and photojournalist Laurie McCandish King is an associate producer for Journeys of Discovery with Tom Wilmer.

You are invited to subscribe to the six time Lowell Thomas Award-winning travel podcast, Journeys of Discovery with Tom Wilmer, featured on the NPR Podcast Directory, Apple Podcast, the NPR One App & Stitcher.com and more than twenty other podcast hosting sites including IheartRadio 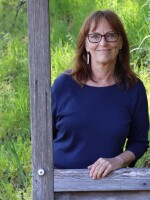 Laurie McAndish King
Laurie McAndish King is an award-winning travel writer and photographer who has been interviewing fascinating people since 2007. Her work focuses on nature, culture, and cuisine. King's true stories cover 20-foot-long Australian earthworms, a journey to taste the world’s best coffee in Bali, and an Ivy League astrophysicist’s explanation of how flying saucers are powered. Her three collections of travel stories—poignant, insightful and often quite funny—have inspired and entertained readers since 2014.
See stories by Laurie McAndish King