You are invited to listen, learn and participate in the conversation, between 1-2 pm. Call in and be part of the discussion at (805) 549-8855 or email questions to voices@kcbx.org.

Central Coast Voices is sponsored by ACTION for Healthy Communities in collaboration with KCBX and made possible through underwriting by Joan Gellert-Sargen. 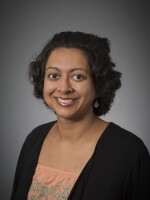 Lata Murti
Dr. Lata Murti is co-host of Central Coast Voices, heard every Thursday afternoon on KCBX from 1:00-2:00 p.m. After receiving her Ph.D. in American Studies & Ethnicity from the University of Southern California in 2010, Lata has dedicated herself to education, particularly in the areas of diversity, equity, inclusion, justice, and belonging.
See stories by Lata Murti