Thousands packed along the sidewalk to watch the famous Summer Solstice Parade, which returned this year after a two-year pandemic hiatus. This year’s theme was “Shine!”

“All right, Santa Barbara, I'm gonna dare you – I want you to shine!” shouted DJ Darla Bea from the first float, kicking off the parade at noon.

The festival celebrates the Summer Solstice, the longest day of the year. It started back in 1974, as a small street performance to celebrate the birthday of artist Michael Gonzalez. Now in its 48th year, the parade is the largest single-day event in Santa Barbara County.

Festivities were moved online in 2020 and 2021 due to the pandemic. Spectators streamed a virtual parade from their living rooms, ordering take out to support local vendors and even logging into a Virtual Beer Garden.

This year, the festival made its grand return. Spectators lined up along the new parade route on Santa Barbara Street, accommodating the outdoor promenade on State Street where festivities used to be held.

In the weeks leading up to the festival, participants spent hours at the Community Arts Workshop on Garden Street, building elaborate floats and sewing costumes.

“The community donates all kinds of crazy materials, what they don't use anymore, and we transform it into art creations,” said artist-in-residence Pali Szilvassy.

Szilvassy has been with the Summer Solstice Celebration since 1990. He’s known for conceptualizing the parade’s extravagant, inflatable floats that close out the procession.

Szilvassy was recently married at the workshop location to his new wife, Raven Wylde. One float was even dedicated to the newlyweds.

“People really appreciated that we express love in the parade in [our] own unique way,” he said.

Selena Rockwell is one of the dancers that accompanied Szilavassy’s flaming heart float. She’s participated in the parade four times before.

“The energy was great, the weather was great, we had so much fun. We gave love [and] blessings out to participants, people watching, and people loved it,” she said.

Of course, with any big event, there’s bound to be some sort of catastrophe.

“There's the typical morning of Solstice, you know, glue gun burns, glitter in the eyes, just some tragedies that happen like that,” Rockwell laughed.

After the parade, DJ Darla Bea continued blasting tunes from her float, decorated in vibrant red with an operational aerial hoop and instruments on raised platforms. She had accompanied La Boheme, a Santa Barbara cabaret fusion performance group, earlier in the day.

Bea said she was pleasantly surprised by the new parade route.

“It actually was quite good up Santa Barbara Street, maybe a bit shorter of a parade, maybe less floats and participants, but I didn't really notice much — I was just be-bopping around, looking around at the crowd,” she said.

Bea said Solstice is her favorite day of the year in Santa Barbara.

“I feel the most alive this day, and I really come out of my shell. I’m my silliest, I get to interact with literally the City of Santa Barbara, my community, my hometown,” she said.

Organizers are already looking ahead to next year’s festival, which will be held in late June 2023. You can find more information about Solstice here. 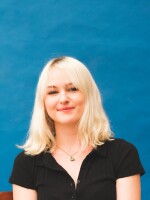