A UC Santa Barbara physics professor is trying to understand what Einstein couldn't. With the support of the Heising-Simons Foundation, Professor Steven Giddings is able to explore gravity and space. Professor Giddings is dedicated to solving the “paradox” of black hole information and the laws that govern our universe. He studies the most basic laws of nature and the fundamental properties of matter to understand how the universe works.

KCBX intern Shayna Weldon spoke with Giddings about the physics of matter and energy.

Weldon: I know your primary research efforts include black holes and string theory, but with a twist known as M-theory. Can you give us a brief description of each of these?

Giddings: I’ll start with black holes. Black holes may be the most mysterious objects in the universe. They take physics to such an extreme that our current laws of physics just break down in the context of a black hole.

In particular, we learn that there is a deep conflict between some of our very most basic principles of physics, the principles of general relativity, which were formulated by Einstein, and the principles of quantum mechanics. When you study black holes, you discover that what we know about physics has a limit and we need to complete it in some way for a more complete understanding.

Weldon: What's an example of black holes changing our thought of physics?

Giddings: Well, we don't know how they will change our thought, but we can understand more deeply what the problem is. So you raise this question of information cast into a black hole and we can explain what the problem is. So for starters, black holes exist out in the cosmos and we have very good evidence for their existence, but apparently they're not permanent objects. One of the most important discoveries made by Hawking is that black holes actually emit particles and ultimately evaporate and disappear if you wait long enough. They don't live forever. Take that realization and then combine it with some sort of a question, and the question is the following: What happens if you drop some information into a black hole? Let's say I lose my iPhone and it falls into a black hole. What happens to that information in the iPhone? Ultimately that black hole, according to Hawking, is going to disappear and evaporate. So, where does the information from the iPhone go?

The laws of general relativity predict that it's basically destroyed. But on the other hand, the laws of quantum mechanics — which appear to govern all other aspects of physics, all other forces that we know — tell us that destroying information like that is impossible.

So there's this clash between the basic principles of quantum mechanics and principles of relativity. This illustrates some sort of conflict in our understanding. And that's something that we very much have to figure out how to resolve for a consistent picture of physics in the end.

Weldon: I understand this divisive stance. Why does it need to be information going into the black hole? Why can't it just be mass or an object?

Giddings: Well, you could think about mass. If I dropped the iPhone in the black hole, it has some mass — or equivalently, energy. In the end, when these particles come out, the so-called Hawking radiation, they carry mass or energy back out.

Weldon: You mentioned before about proving that black holes exist. Can you please touch on that?

Giddings: Well, we've had really good evidence for a long time, good indirect evidence that black holes exist. All of us in the field have believed, at least, that there's something very much like black holes out there, though we don't understand what black holes are at the quantum level. But there's something that fits much of the description of a black hole and we've seen a lot of evidence for that from various observations in astronomy. But the most spectacular thing has been just in the past several years with two really amazing discoveries that bring this to a very concrete level. One was the observation of the coalescence of black holes. When black holes coalesce, they emit a huge amount of gravitational radiation, an enormous amount of energy that comes out in gravitational radiation. It's very hard to measure, but we have now succeeded in measuring that gravitational radiation from colliding black holes.

The first discovery was spectacular by LIGO [Laser Interferometer Gravitational-Wave Observatory, CalTech's facility that detects ripples in the fabric of space-time]. But now, it’s bread and butter almost every day. We’re seeing these things more and more commonly, these emissions of gravitational radiation from colliding black holes. To emphasize the amount of energy released, it's really spectacular. It's an amount of energy comparable to if you took three of our suns and converted their mass and energy — that’s how much energy comes out. It’s a mind-boggling amount of energy that comes out. But again, it's very hard to measure. So by the time it reaches Earth, it's an incredibly sort of difficult signal. But we are now regularly measuring those and seeing very good evidence for black hole like objects.

The other one is the picture that has been seen by billions of people of what is a black hole at the center of M87, which was a nearby galaxy. This one was a real behemoth. It's around six and a half billion times the mass of the Sun and its radius is significantly larger than our Solar System. It’s an enormous object and it has all of the right characteristics to fit our basic description of black holes.

Weldon: So what's the greatest challenge in your role?

Giddings: At the intellectual level, we're dealing with what I think are arguably the most difficult questions that one can try to answer. We are trying to understand reality at its most basic level and in domains that go far away from common human thought, where we go beyond our intuition about how things work.

I think this is the most challenging domain of human thought, understanding the most basic laws of physics at the quantum level, which may involve, not just wild ideas like different dimensions of space, but may involve something even different than space. We may be talking about some new quantum version of space that is just different from what we see. So I would say that's the most challenging thing, and maybe the second most challenging thing is finding the time with everything else that happens in life to really think hard about these things because it is really something that takes a lot of mental energy. And of course there are always other things that can be distractions and other challenges.

Weldon: Where do you see the physics field headed?

Giddings: Well, that's a good question. Physics, as you know, broadly, physics has contributed an enormous amount to society with all kinds of technological advances. We’re talking about building quantum computers, which would be much more powerful than ordinary computers and all kinds of medical devices are coming out of physics. Understanding nature at the most basic level is something that has really served society in a number of ways. And that will continue. The more we understand about the basic nature of matter, energy, and forces, the more we can do and the more useful things we will have. In terms of the future of physics at the more fundamental level, it is getting to be more and more challenging. Progress is not as rapid as it has been. But I think we are continuing to progress. One of the challenges has been finding ways to make contact between thought and experiment.

We've had various ways to do that in other aspects. For example, we have a high-energy particle accelerators that look at other aspects of the basic behavior of matter. But really going after the most fundamental question of the quantum structure of space and time, quantum gravity of black holes, that is even more challenging to go after observationally. But again, we think there's some prospect that we could do so, and that's part of the motivation for the work we're doing. Partly because of these extreme observations we can make of very extreme objects — black holes — and partly there's this question of very precise measurements we can use to understand more about the quantum structure of space and time. So these are big challenges, but we're working on them and hopefully making some progress.

Weldon: Well, thank you. Thank you for your time.

Giddings: Thank you, you too. Take care. 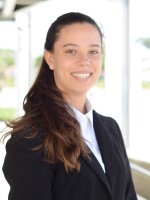 Shayna Weldon
Shayna Weldon is a KCBX intern and a senior Cal Poly San Luis Obispo civil engineering student. Shayna is passionate about connecting industry leaders that make our world so unique and presenting their insight to the public.
See stories by Shayna Weldon