On this week's episode of Issues & Ideas, major newspapers and public radio stations across California—including KCBX—are collaborating on a statewide project to look at personnel records from local enforcement agencies.

The records became accessible by the public after a new police records transparency law took effect at the beginning of 2019. But many police departments are taking their time in turning over the records. We talk to two San Luis Obispo Tribune reporters about road blocks they've encountered working on a story, and how the paper is trying to close loopholes in the law in the next legislative session. We also invited the new leader of the San Luis Obispo Wine Association into the studio to talk about member wineries and marketing wines made in the Edna Valley and Arroyo Grande to other parts of the country, and the world. A Central Coast reporter talks to us about hidden mines in San Luis Obispo County. And Father Ian Delinger experiences the Jewish tradition of the Seder through wine, stories, and foods to get to know more about Passover traditions. 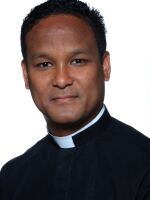 Fr. Ian Delinger
Fr. Ian Delinger currently serves as Rector at St Stephen's Episcopal Church in San Luis Obispo. He was born on the Central Coast, and was raised in both rural western Nebraska and on the Central Coast. He studied Chemistry at Truman State University in Kirksville, Missouri. Then, he moved to the Silicon Valley where he was as a project manager in a consulting firm which specializes in environmental, health and safety issues for the semiconductor manufacturing industry and other high technology industries, followed by a couple of stints in corporate events management and marketing.
See stories by Fr. Ian Delinger